The Best of American Tourister Luggage 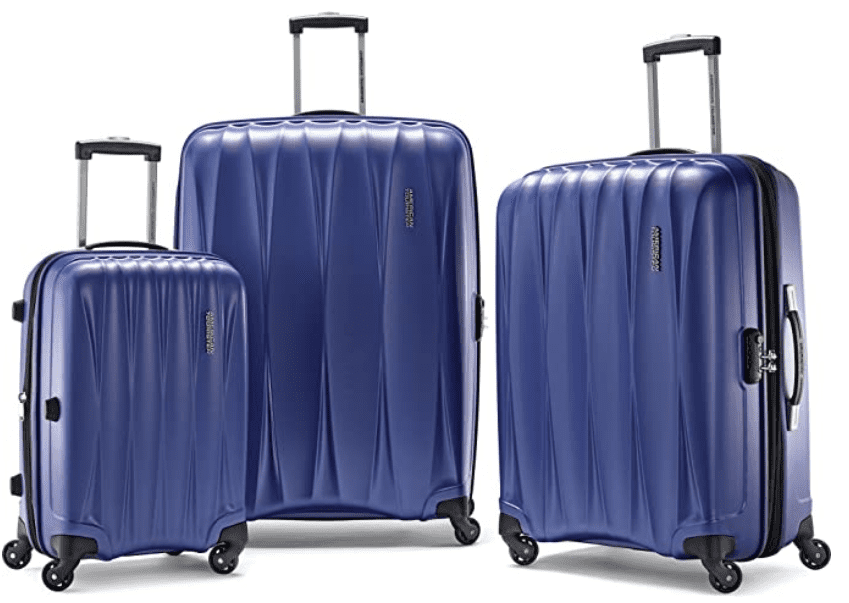 If you want fun luggage you can afford that lasts you a long time, American Tourister has some of our favorite luggage pieces across all luggage brands.

With every great brand is a great origin story. In 1933 American Tourister founder Sol Koffler took his life savings out of the bank to gamble on a luggage company in his Rhode Island town.

His dream was to create a quality piece of luggage that would sell for a single dollar but last for a lifetime.

Although a lot has changed since Sol Koffler dreamt up his luggage company, a lot of what made American Tourister successful remains true. Sure, you can’t buy American Tourister luggage for a buck anymore, but the values of durability and affordability, combined with fashionability, still form the backbone of the American Tourister bag and the brand that it represents.

American Tourister has been in the business for a long time, and with their massive reach, they have a lot of luggage pieces to offer. Below are our best of the best: our top 8 pieces of American Tourister luggage, plus two fun kids’ luggage for a family trip. 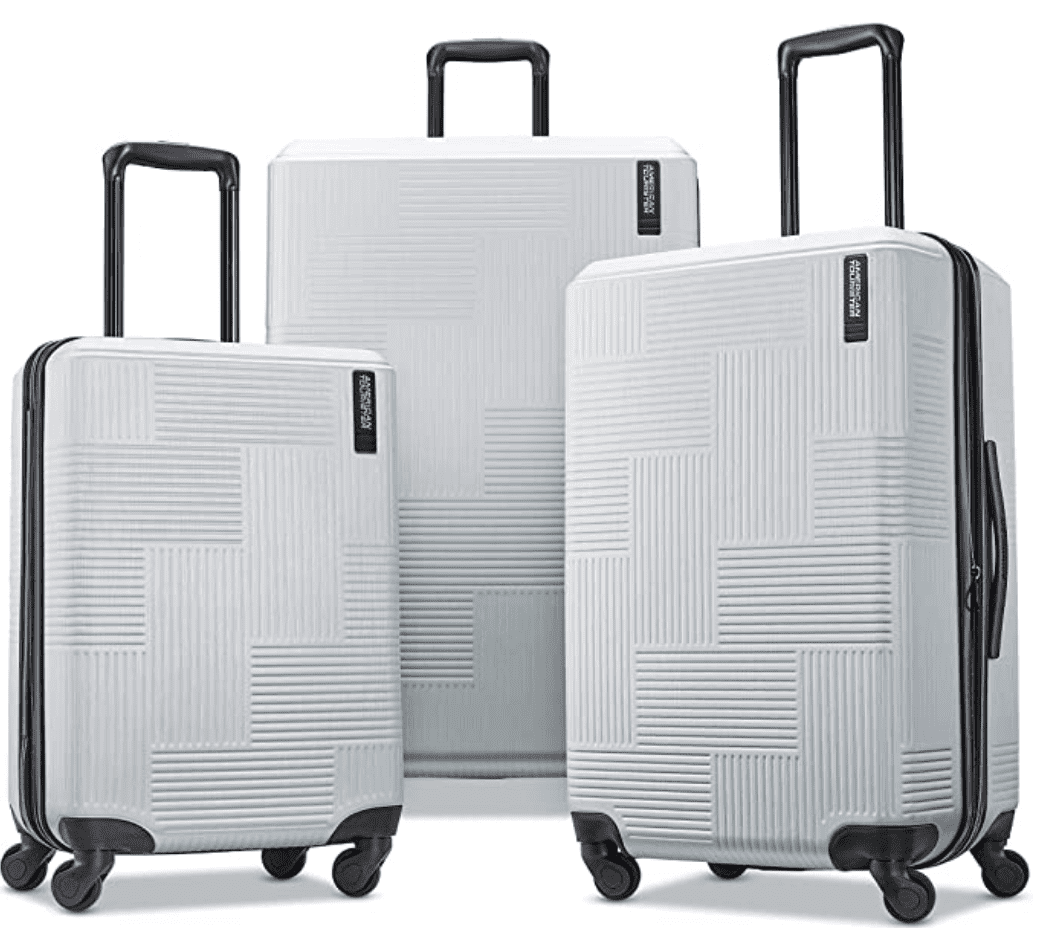 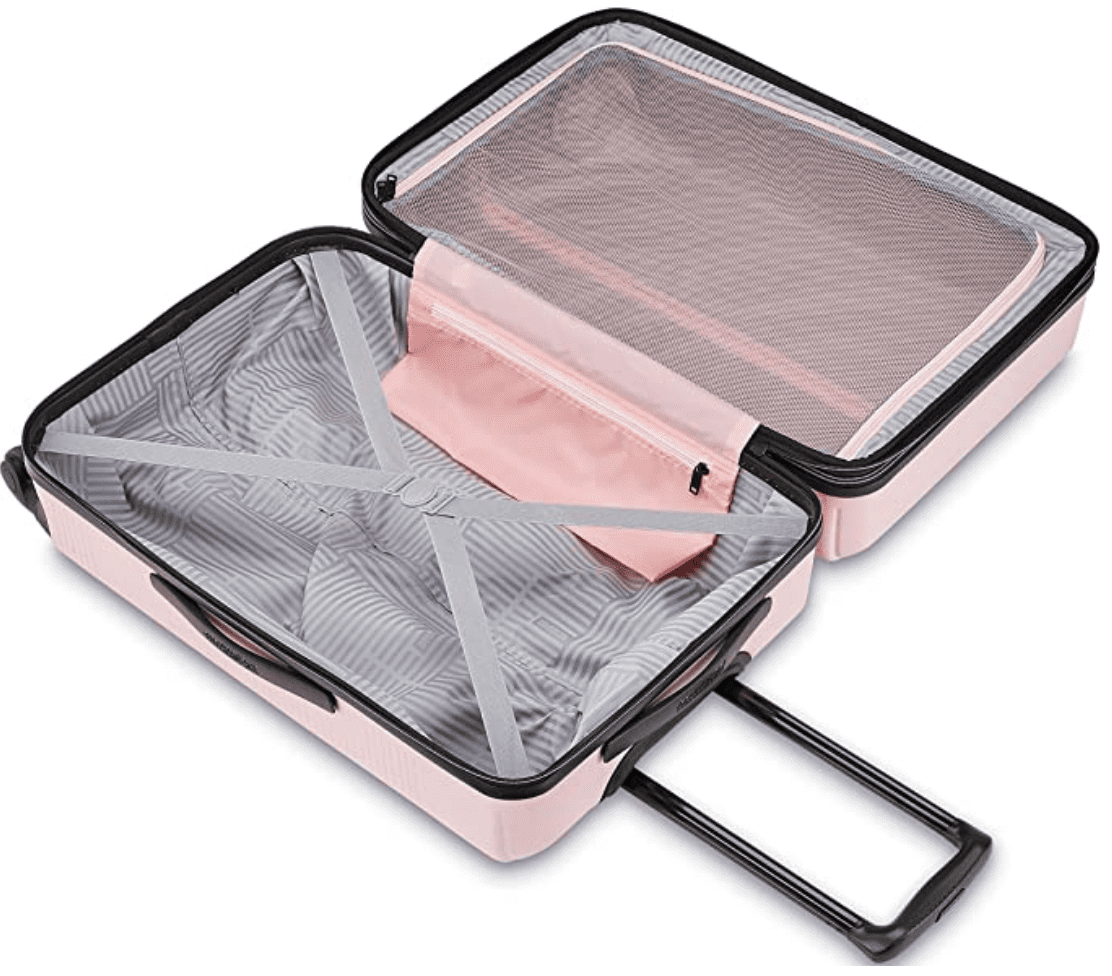 We love the attractive design on this three-piece set. The hard cover on these suitcases also makes all three highly durable. With this luggage, you don’t need to worry about the wear and tear of many trips: the suitcases are covered by a ten-year warranty, so you can go globetrotting without ever needing to worry about your luggage.

The three pieces of luggage included in this package are perfect for any kind of travel. The 20” Spinner is small enough that you can use it as a piece of carry-on luggage on domestic flights. This means you can travel extremely light while remaining in style.

The 24” and 28” Spinner luggage offer more space for longer trips.

In addition, all three of these pieces of luggage are expandable. If you’re someone who always ends up with more in your suitcase after vacation than before, this feature will come in handy.

The 360-degree rotation of the wheels on all three of these suitcases is also a great feature. Pull the luggage behind you or push it in front of you. At the same time, if you do have to carry it, these suitcases are relatively light for ease of transport. 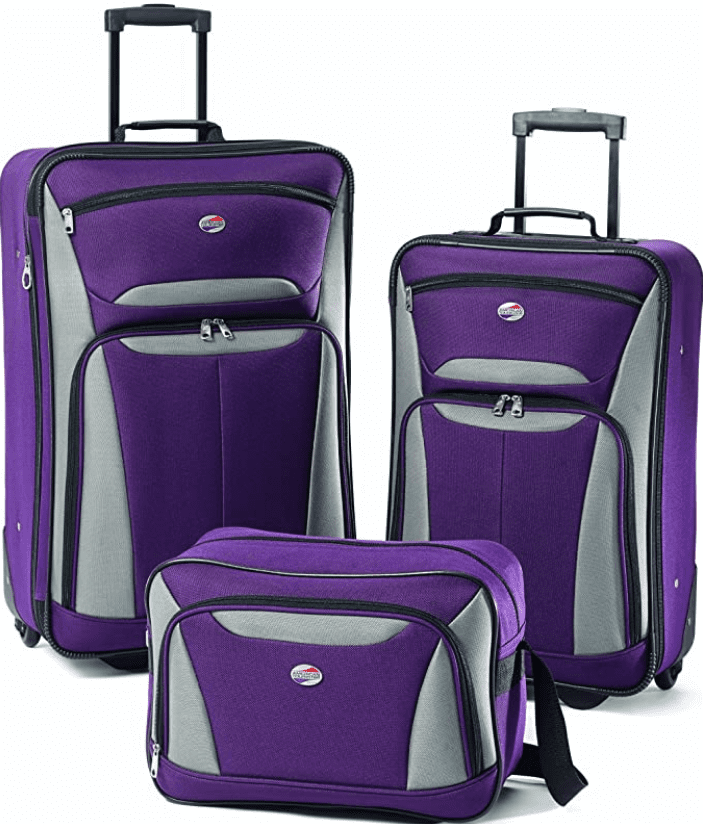 If hard luggage isn’t your thing, this highly durable soft luggage from American Tourister will be right up your alley. Part of what makes this luggage so durable is each of the pieces in this set have reinforced corners to prevent wear and tear.

Beyond the durability of the luggage, we like the simple, muted colors of the design. You can choose between black, red/black, and blue/black. The red/black design is decidedly the worst of the three color schemes, and considering the fact that everyone on the planet uses red luggage right now, you may prefer to go for the black or blue/black options.

The boarding bag, the smallest of the three pieces, works great as a carry-on piece. Unfortunately, this piece doesn’t roll, so you’ll have to sling it over your shoulder. The other two bags have inline wheels that are specially made for smooth rolling and durability. The secret is that American Tourister constructed these wheels with polyurethane and ball bearings. 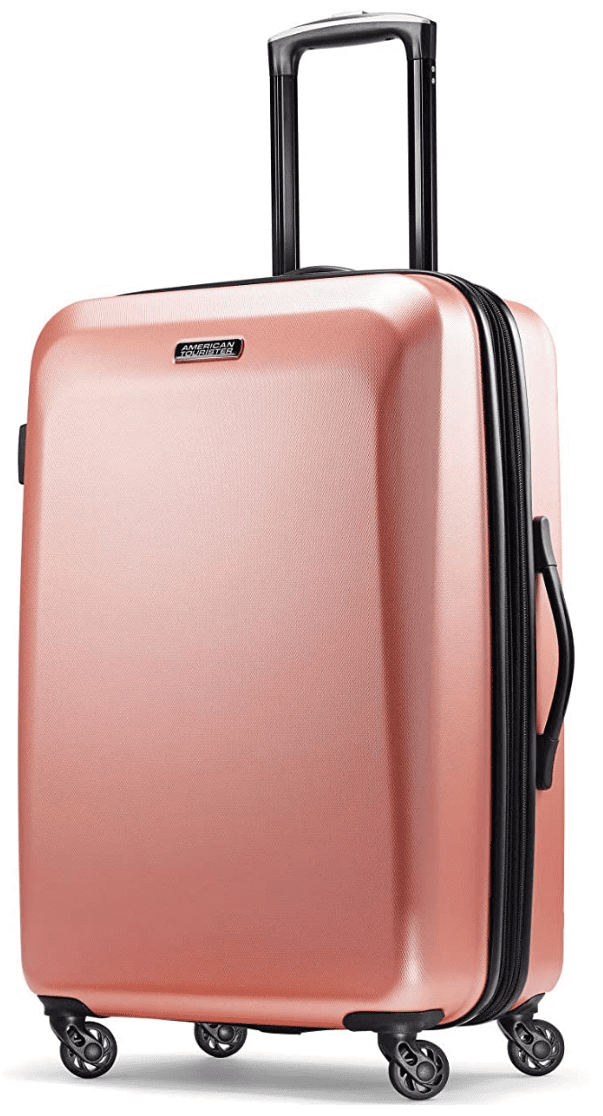 If you’re someone who likes to have fun designs on your luggage, the American Tourister Moonlight Hardside may be the choice for you.

This expandable spinner luggage is perfect when traveling with a checked bag on a busy flight (overseas flights especially) because you’ll be able to spot your luggage from a mile away! Choose between rose gold, marble, palm trees, green/yellow soccer ball, and plenty of other fun patterns.

Inside, the piece looks just as nice as the outside. Handy compartments abound for you to organize your trip nicely, and the black-and-gold lining looks really sharp with the rose gold exterior.

This trolley bag is also highly customizable: choose between a carry-on size, a medium, or a large checked bag; or, get all three in a three-piece set. 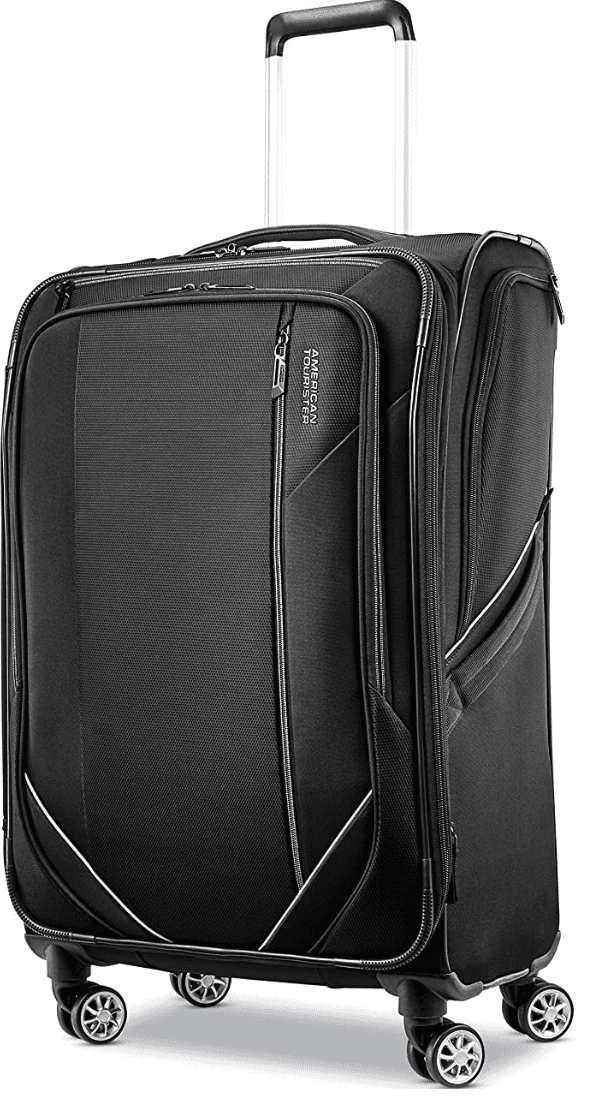 In a world that experienced a lot of working from home recently, you might be sick of the word zoom — but trust us, this piece will get you out of the house in a flash!

This trolley bag is a perfect piece for those who prefer softside luggage but still want the easy-to-maneuver spinner wheels. The Zoom Turbo Softside brings the spinner wheels we’ve seen with the hardside luggage and combines it with the softside style. 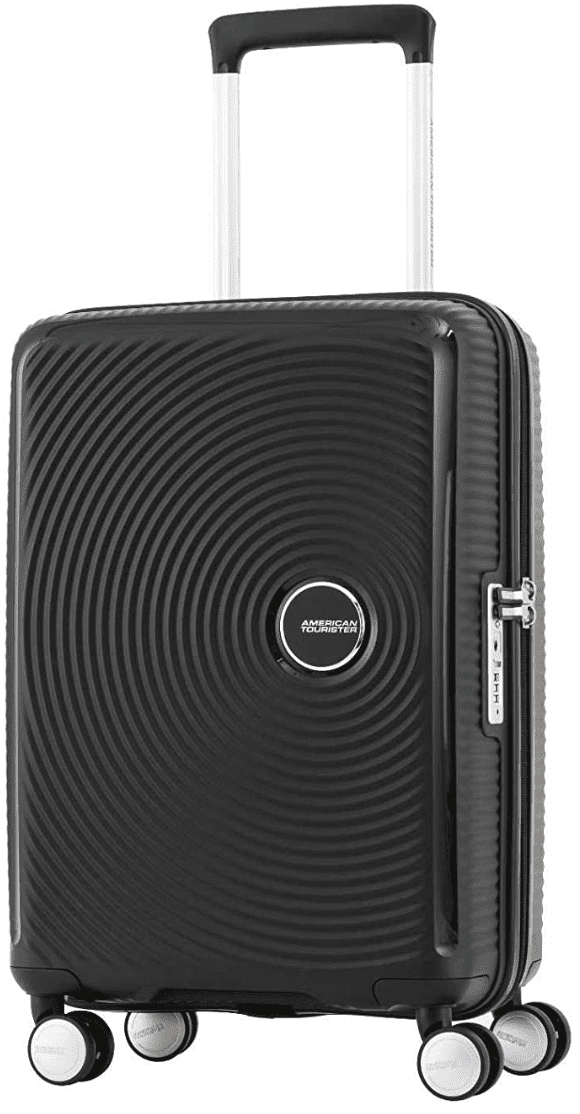 We love the look of this bag. The American Tourister logo pops against the ripples on the hardside case like a stone dropped in a pond.

There’s a lot besides the design to love, however. The high-quality bags we’ve seen from American Tourister don’t let up here: this piece of book-opening luggage makes accessing your things extremely easy.

This suitcase is also great for deterring theft: a lock built into the case makes it so only you can access your suitcase but still allows you to access the contents quickly if, for example, TSA requests to look inside. 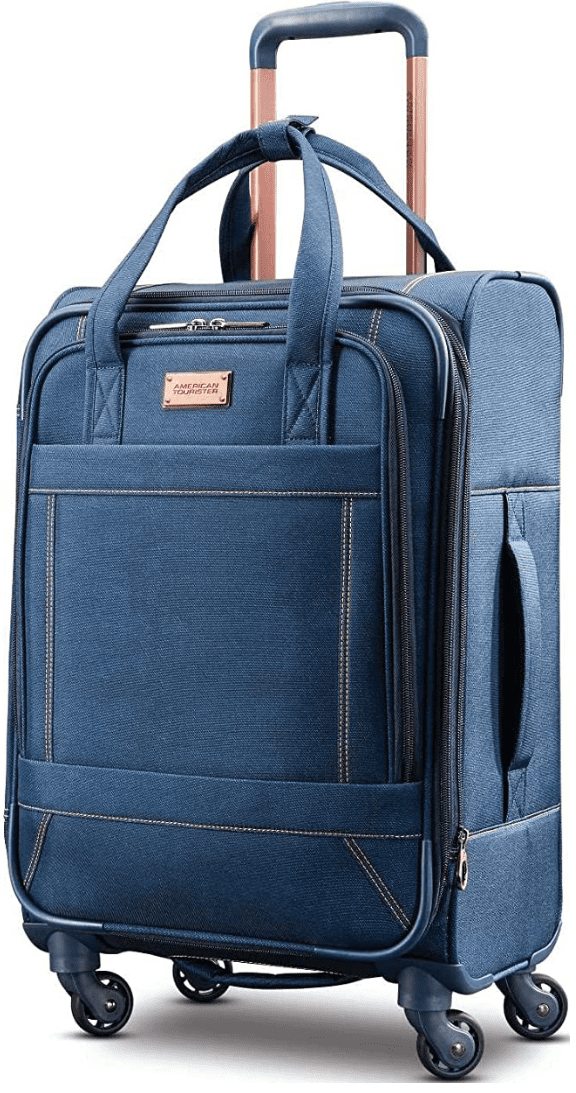 The Belle Voyage is a really stylish piece for which we can find a lot to love. The blue denim design of the standard Belle Voyage is quite unusual: it’s like a pair of overalls decided to become a suitcase. We’re having a little fun here, but the look of the piece is closer to luxury than affordability.

At the same time, however, Belle Voyage, like most American Tourister luggage, is highly affordable. The 1.5” of extra expandability, too, is a godsend for those travelers who like to bring everything but the kitchen sink.

Like all pieces of American Tourister luggage, this suitcase is backed by a 10-year warranty. 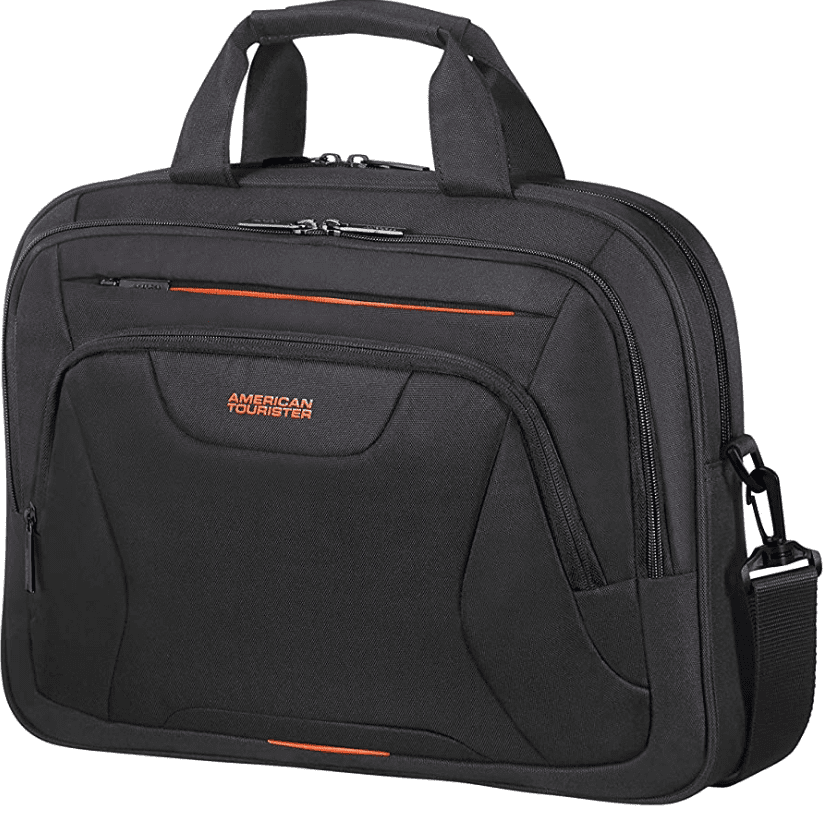 This unisex laptop bag is perfect for any kind of laptop on the plane. If you’re someone who travels a lot and needs to do your work while a mile high, you may consider getting this laptop bag from American Tourister.

While accomplishing the minimum of holding your laptop, this bag is also great for protecting your laptop while you’re moving through the chaotic place that is the airport. The padded laptop slot can accommodate a laptop as large as 15.6 inches, while the tablet slot can take a tablet of 10.5 inches or less. 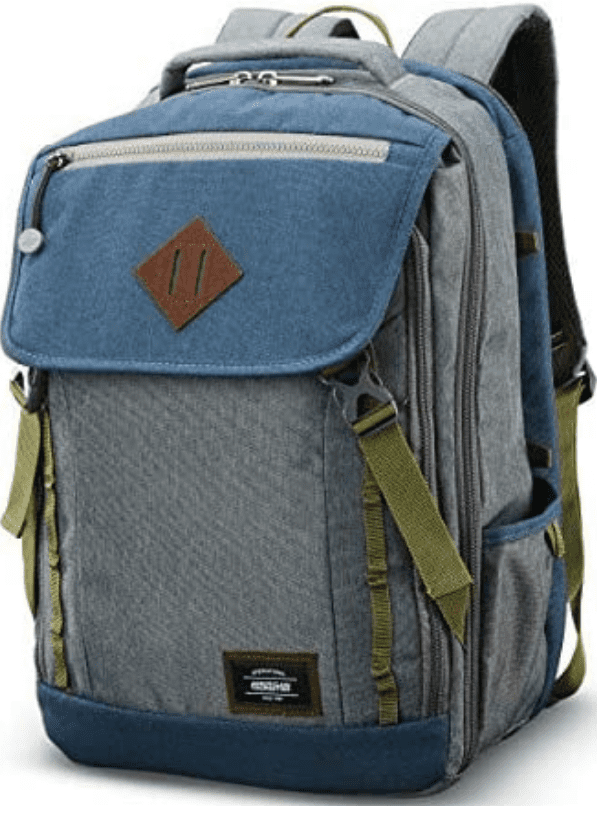 If a shoulder-sling laptop bag isn’t your speed, you should definitely check out this American Tourister backpack. The dig dug is stylish, lightweight, and large enough that you can carry a lot of things in it.

In addition to the awesome look on the outside, this backpack is designed with the airplane traveler in mind and features plenty of compartments for you to keep yourself organized on your trip.

The dedicated laptop pouch can accommodate a 15.6-inch laptop, and its padding will keep that laptop safe while you fly.

American Tourister offers many adult bags, but they’ve also got some fun children’s luggage on offer. 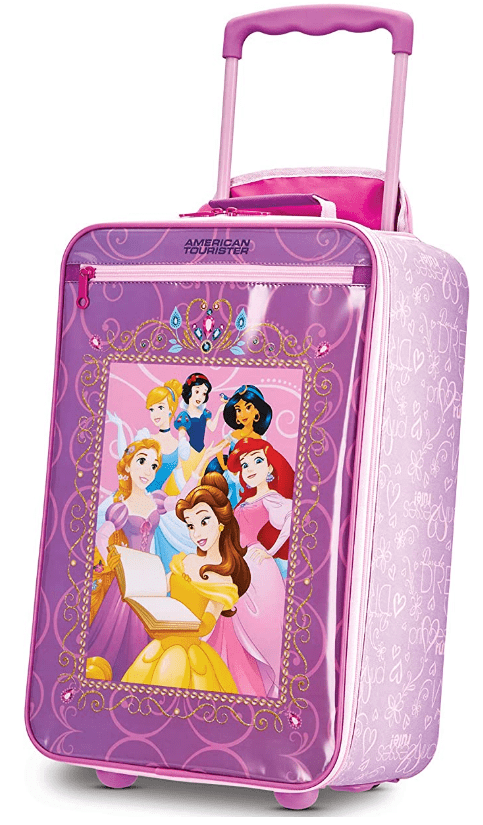 If your child is into Disney princesses, they will love this fun hardside bag! The Disney princesses that defined many a young person’s childhood show up prominently on the side of this pink case.

The inline wheels mean that your child can easily roll this bag behind them, while the hardside design means the suitcase is durable to withstand even the most careless of travelers. 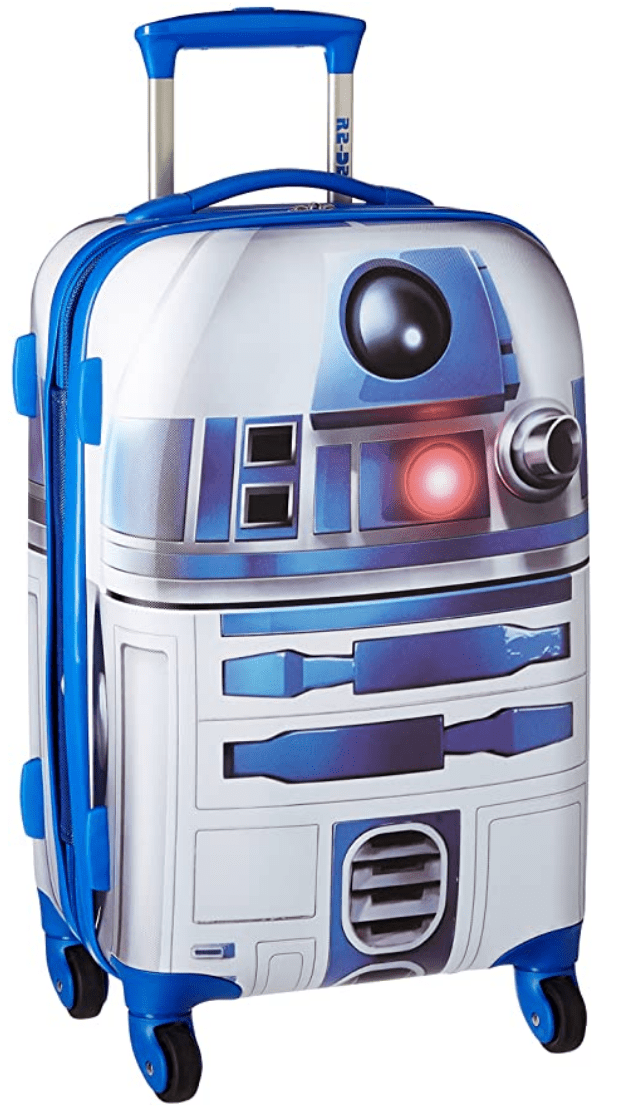 Although keeping with the Disney theme, we’ve moved from the realm of Disney princesses to a time that was long, long ago in a galaxy far, far away. Yes, we’re talking Star Wars.

Kids love the R2D2 design of this suitcase as they can pretend they’re actually carrying along everyone’s favorite Star Wars robot with them on their journey to wherever it is they’re going (probably not Tatooine, but what can you do).

Finding the right bag for your trip is an important aspect of travel.If as if your bag is too heavy or hard to deal with, your time traveling in the airport and taking cabs can be a nightmare. If you’re in for an affordable, high-quality, and durable bag, you might choose to go with an American Tourister Bag.

Whether they’re American Tourister trolley bags, luggage, backpacks, or laptop cases, this brand has something for everyone and for trips of all kinds. Whether it’s the short flight from Memphis to Nashville, or the long haul from Los Angeles to Tokyo, or anything in between, these stylish bags have you covered–for a long time!

Looking for more luggage choices? Check out our article on Samsonite here.